In part 2, we reconstructed the Shadaj Gram scale using two different perspectives and showed the results to be mutually consistent. Shadaj Gram is also quite old, probably dating back 2000 years. In the process of deriving Shadaj Gram from the Sama Gana scale, we came up with useful the musical intervals of Pramana Shruti and the other 2, 3 and 4 Shruti intervals. Music scholars used these intervals to delve deeper into the concepts of consonances and microtones in Indian Classical music. In this part, we will look at the extended 22 Shruti version of the Shadaj Gram scale which can be constructed using these intervals.

Bharat and Sarang Dev in their respective musical treatises, describe a musical experiment involving two harps called the Achal veena (Achal means non-varying) and the Chal veena (Chal means varying). By adjusting the pitches of the strings of the Chal veena with respect to the Achal veena, they describe the derivation of a 22 note scale which can be regared as an extended version of Shadaj Gram.

Before we begin reconstructing any tuning system, let us start with the concept of the fundamental note Sa. In Indian Classical music, all musical notes are defined based on their relationship with Sa. You can use the settings below to set the Sa to any pitch you prefer. All the demos on this page would play according to this setting.

Note: This article features high quality audio demonstrations which are an integral part of the narrative. For ease of understanding, these demos have been presented in the form of a musical keyboard which many would recognize. Simply click on Start to activate and tap a key to play. Please try and use a pair of headphones or good quality speakers to listen to the samples with maximum clarity.

Let us perform the Bharat-Sarang Dev harp experiment and derive the full 22 shruti scale mathematically. The steps followed in the experiment are given below.

Listen to Demo 1 below to familiarize yourself with the Achal Veena scale. This is nothing but the Shadaj Gram scale in Demo 4, but depicted a bit differently. Specifically, the notes are labelled according to their Shruti numbers as per Table 3.

Listen to the Chal Veena scale after Round 1 in Demo 2 below.

Note: Again, the Madhyam Gram scale as described by Bharat and by Sarang Dev, has the note Pa♭ at Shruti #16, while the rest of the notes are taken to be the same as in Shadaj Gram. As observed above, this makes the notes Re♭ and Pa♭ consonant with each other.

Listen to the Chal Veena scale after Round 2 in Demo 3 below.

Listen to the Chal Veena scale after Round 3 in Demo 4 below.

Listen to the Chal Veena scale after Round 4 in Demo 5 below.

If you are interested in the actual values for each of the 22 shrutis, refer to Table 4 which summarizes the result of all these steps (scroll horizontally to see the whole table).

The Shadaj Gram scale can also be represented by showing the relevant pitches in a circle (see Figure 1). The figure depicts how the Chal veena is depressed by the different shruti intervals in each round. 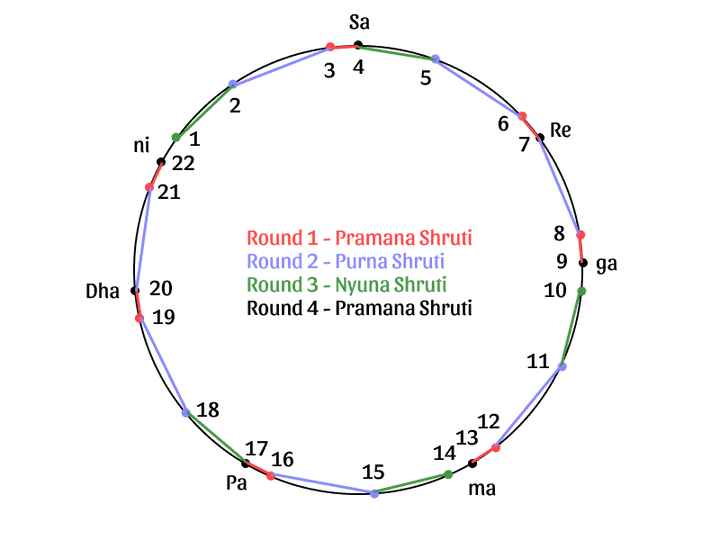 We have reconstructed one of the most significant tuning systems used in Indian Classical music. The Shadaj Gram and (the related) Madhyam Gram scales gave rise to musical structures called Jatis from which many modern day Indian Ragas have evolved.

One other equally significant tuning system used in Indian Classical music was due to the music scholars Ramamatya and Venkatamakhin. We will look at it in part 4.