For that, it is necessary to understand its underlying tuning systems. In this four part article, we reconstruct two significant tuning systems used in Indian Classical music:

In a couple of related articles, we cover how tuning systems influence musical scales and how this affects the tuning of a Tanpura to play these scales.

Before we begin reconstructing any tuning system, let us start with the concept of the fundamental note Sa. In Indian Classical music, all musical notes are defined based on their relationship with Sa. You can use the settings below to set the Sa to any pitch you prefer. All the demos on this page would play according to this setting.

Next, it is useful to familiarize ourselves with the four basic intervals of Dviguna (octave), Pancham (fifth), Madhyam (fourth) and Gandhar (major third). You can play and check these intervals using the keyboard below (just click on Start to activate and tap a key to play). Here Sa denotes the fundamental and Ga, ma, Pa and SA denote the Gandhar, Madhyam, Pancham and Dviguna respectively. Note that the notes here do not match up with today's standard 12 tone equally tempered scale.

Note: This article features high quality audio demonstrations which are an integral part of the narrative. For ease of understanding, these demos have been presented in the form of a musical keyboard which many would recognize. Simply click on Start to activate and tap a key to play. Please try and use a pair of headphones or good quality speakers to listen to the samples with maximum clarity.

As you can hear from Demo 1, Pancham, Madhyam and Gandhar are pleasant sounding intervals. For the musically inclined, they may be easy to recognise by ear. It is also possible to determine their frequency ratios in relation to the fundamental.

The first scale we will examine is the Sama Gana scale which was used to sing passages from the Sama Veda. Folk music or informal music was always around in India. But Indian music started to get formalized as the chants of Rig Veda evolved into a more sing-song way of rendering passages from Sama Veda. Rig Vedic chants already used three notes called Svarita (neutral drone), Udaatta (higher note) and Anudaatta (lower note). This evolved further in Sama Gana.

Sama Gana is the act of singing the Sama Veda. According to Ustad Zia Fariduddin Dagar, a typical arrangement employed three groups of singers with one group singing at the pitch Sa, the second at ma and the third at Pa. Each group in turn used three notes, a center note, a low note and a high note, similar to those used in Rig Vedic chants. The center note was whichever pitch they were singing, i.e., Sa, ma or Pa. The high note was higher than the center note by a specific tone and the low note was lower than the center note by the same tone. Refer to Demo 2 below.

A traditional rendition of Sama Gana

Observe how the different groups stop and start chanting at appropriate points during the rendition, so that overall it creates an impression of a musical scale. The rendition is roughly in the scale of G. 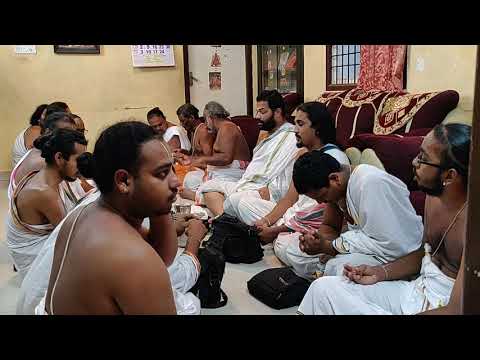 Using this, the Sama Gana scale as depicted in Table 1 can be derived. The method of derivation is given in the remarks column. The Sama Gana scale is discussed and documented in a number of references (for example, see Lakshanagrandhas in Music by Dr. Bhagyalekshmy).

You can play and check how the Sama Gana scale sounds using Demo 3 below.

In this scale, the intervals Re-ga and Dha-ni were regarded as Vivadi (dissonant). The concept of Vivadi notes is mentioned in Dattilam and Sangeet Ratnakar (see Chapter Sangita Ratnakara in Lakshanagrandhas in Music or Chapter Nada, Sruti and Svara in Sangeet Ratnakar, Part 1). The size of these intervals can be calculated to be 32/27÷9/8=256/243=1.053497942. This interval 243256​ was recognized and known as Purna Shruti. Note that the Purna Shruti is roughly comparable to the semi-tone used in today's standard 12 tone equally tempered scale. The standard semi-tone is 100 cents wide, while the Re-ga interval is a bit narrower at 90.2 cents. This scale may have been appropriate for chanting, but as a musical scale, it was not considered appropriate. In order to make it musical, the music scholars of the day felt that the Re-ga and Dha-ni intervals needed to be slightly increased.

In the next part, we will attempt to answer the question of exactly how the tuning of these intervals was manipulated and what came about, as a result.

To summarize, we have introduced the concepts of basic intervals in Indian Classical music, and we have reconstructed the Sama Gana scale. This scale is really old, probably dating back 3000 years. It can be regarded as the true origin of scripture based or Classical music in India. However, in this scale, the intervals Re-ga and Dha-ni were regarded as vivadi or dissonant. The Shadaj Gram scale was likely devised as a musical solution to this problem of vivadi intervals of Re-ga and Dha-ni. We will look at Shadaj Gram in the next part.